As 2019 ended, President Trump signed into law The Setting Every Community Up for Retirement Enhancement Act of 2019. The SECURE Act was one of the few legislative items fully supported by both Democrats and Republicans.

The Act made 26 different changes to the law that essentially break down into three categories: (1) making things easier for small employers to set up retirement programs, (2) increase lifetime income options in retirement plans, and (3) change rules regarding required minimum distributions (RMDs) during life and after death.

Although I've read 15+ articles on the SECURE Act and have listened to a couple of hours of presentations on how the Act impacts current and future planning, there are still a lot of rules to digest fully. At this point, I'm really upset about the long-term implications of this Act.

I do like the rules that simplify and incentivize small employers to set up retirement programs. I'm particularly interested in the changes to the Multiple Employer Plan (MEP) rules, and I'll be digging into how this impacts my small business owner clients.

I'm not a big fan of the changes that make lifetime income options more visible. The bulk of these provisions look like they were passed by the insurance lobby to sell more insurance products. Although nobody is forced into anything, I worry that retirees will overuse these annuity options because they are so visibly linked to their employer retirement plans.

When added up, I hate the new required minimum distributions rules.

Congress did make two changes that could be helpful for those over 70½: (1) contributions are now allowed to traditional IRAs for those working past 70½, and (2) required minimum distributions ("RMDs") now begin at age 72. Although I do have clients that will benefit from these changes, these benefits are small.

By far, the biggest deal in the SECURE Act is the change in how inherited IRAs (and other tax-deferred accounts) are handled. The Joint Committee on Taxation estimates this change (discussed below) to amount to a tax increase of $15.7 billion over the next 10 years. Although this is a big number, I believe that the Committee is actually underestimating this tax increase as the impact will start to compound over time.

So, what is it that is making me so upset? Well, this Act eliminates the stretch IRA rules.

Before this year, when a non-spouse (say a child or grandchild) inherited an IRA, they were allowed to take distributions from the account over their life expectancy. For example, a 60-year-old inheriting an IRA from their mother had over 25 years to liquidate the inherited IRA. (This time frame was 44 years for a 40-year old and 63 years for a 20-year old.) "Stretching" the IRA preserved the tax-deferral benefits of the IRA and allowed inheritors to keep their taxes to a minimum.

The new rules require these same inheritors to liquidate their entire IRA over 10 years. (The rules have not changed for spouses and some other "eligible designated beneficiaries.") The new 10-year window forces distributions over a much shorter time frame, and this results in higher taxes.

Let me provide an example:

Under the new rules, Justin might choose to take from his inherited IRA equally over the next 10 years. His $50,000 annual distribution would add roughly $16,700 to his yearly taxes. Eleven years from now, his inherited IRA would be empty.

Under the new rules, Justin might instead choose to wait and take his entire inherited IRA balance in year 10 when the IRA has grown to over $775,000. His massive distribution would add over $360,000 to his annual taxes, and again, he has nothing in his inherited IRA at that time. 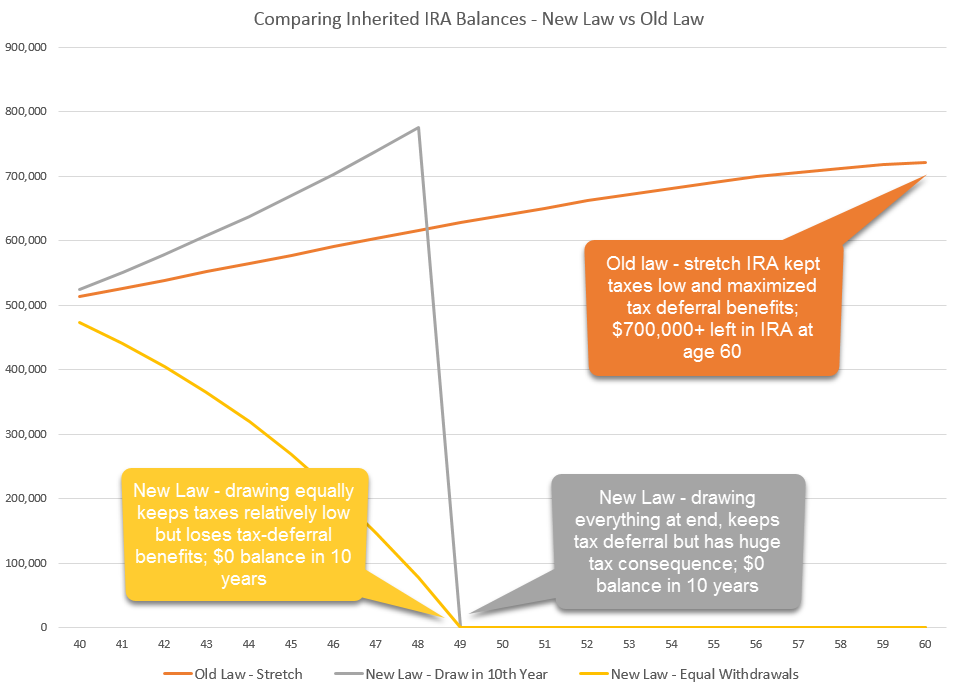 Even though this example oversimplifies things a little, it points out how impactful this new tax law will be. Does Justin feel more SECURE? He shouldn't, and I don't either!