Governments have long waged a war on cash in an attempt to curb terrorism and tax evasion. Their focus has typically been on eliminating large denominations, like Europe’s €500 bill or India’s 1,000 rupee note.

However, two U.S. lawmakers have a much smaller target in mind: the lowly penny. Their complaint is that the cost to mint billions of these one-cent coins is costing taxpayers a small fortune.

The penny, the first currency of any type authorized by the U.S. government, was initially struck in 1787, though it didn’t become legal tender until 1856. Since then, more than 300 billion one-cent coins have been minted.

Abraham Lincoln became the first U.S. president to adorn a coin when he was put on the penny in 1909 on the 100th anniversary of his birth (he wasn’t added to the $5 bill until 1914). The Lincoln penny was also the first to include the inscription “In God We Trust”.

Arizona Rep. Jim Kolbe first tried to get rid of the penny in 1989, under the Price Rounding Act. In 2001, Kolbe introduced the Legal Tender Modernization Act of 2001 and, in 2006, he introduced the Currency Overhaul for an Industrious Nation (COIN) Act. None of these were made into law even though there was some public support.

The latest salvo came in March, when senators John McCain and Mike Enzi introduced legislation to eliminate the minting of pennies. The bill also proposes switching the paper one-dollar bill to a coin and changing the composition of the nickel in order to bring down its cost. They said it would lead to an estimated $16 billion in savings.

Why eliminate the penny?

One of the most compelling reasons cited for getting rid of the penny is the fact that it’s become unprofitable due to inflation and the rising cost of metals. The U.S. Mint has been losing money on every penny it’s produced since 2006. 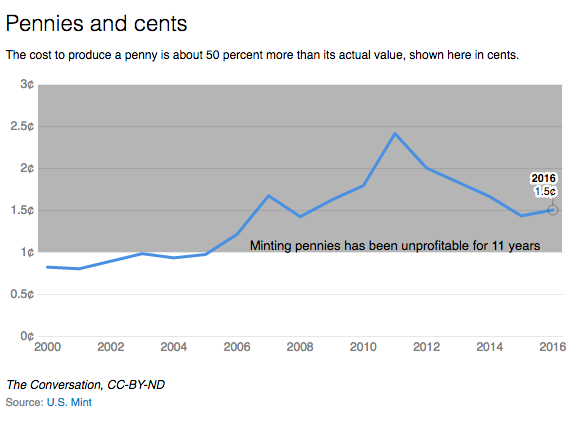 Last year, it cost the Mint 1.5 cents to produce each penny. That amounted to a loss of almost $46 million on the production of more than nine billion pennies.

Pennies are more expensive to produce due to the soaring cost of metals. The price of zinc, which currently composes 97.5 percent of a penny, has tripled over the past 15 years. Copper, which makes up the other 2.5 percent (and was once the sole ingredient), has risen almost fourfold.

The penny isn’t the only coin that’s underwater. The nickel, comprising three-quarters copper and one-quarter nickel, currently costs 6.3 cents to make – which is practically a steal compared with the 11 cents it cost in 2011. 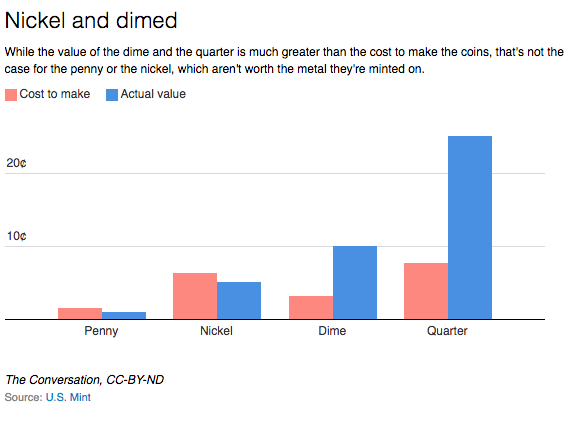 Some countries have already banned one-cent and other low-value coins entirely. Canada eliminated its penny in February 2013. Australia got rid of its penny in 1992 and is expected to do the same with its nickel soon.

Parts of the U.S. government have already stopped using pennies. The Army and Air Force, for example, have banned pennies since 1980 in all overseas military exchanges where soldiers and their families can shop, because they were too heavy to transport.

There has never been a coin in circulation in the U.S. worth as little as the penny is worth today. When we discontinued the half-cent coin in 1857, it had a 2017-equivalent buying power of 13 cents.

The average American worker makes nearly a penny every second. That means it’s literally not worth our time to bend down and pick one up from the sidewalk.

For the love of pennies

While killing off the penny may seem like a slam-dunk financially, the reason we haven’t is pretty straightforward: people love their Lincolns. When polled about their feelings in 2014, the majority of U.S. individuals opposed the elimination of either the penny or the nickel. 43 percent said they would be “disappointed” or “angry” if the government stopped making them.

Anything that disappoints and angers taxpayers is not going to be a high priority item in Washington. In the scheme of things, the money lost minting pennies is small change. This issue has become a symbol for government incompetence. Here’s my solution – let’s flip for it? Heads we stop minting pennies; tails we continue.